As a reminder we have currently read up to chapter 9. In these first chapters we have seen Stanley unfairly accused of stealing a pair of trainers and sent off to Camp Green Lake (a juvenile detention centre for boys) in order to make up for the crime he did not commit. We have been introduced to many different characters and have learnt that he will have to dig a 5 foot hole every single day in the blazing heat of Texas. In chapter 8 we were introduced to the deadly yellow-spotted-lizards that have made the newly formed holes their habitats.

For your English task this week you will need to read chapter 9 (pages 43-48). In this chapter Stanley begins writing a letter to his mother about his first day at 'camp' but is interrupted:

Today was my first day at camp, and I've already made some friends. We've been out on the lake all day, so I'm pretty tired. Once I pass the swimming test, I'll get to learn how to water-ski. I...'

Stanley is trying to not worry his mum and pretend that Camp Green Lake is a nice place to be. Can you have a go at finishing off his letter in the same way?

Before starting you could do a number of tasks to help you plan out and build up to your piece of writing.

Draw a story map to show what has happened in the story so far, you could include important words or phrases to help you. I have included an example of a story map to remind you. 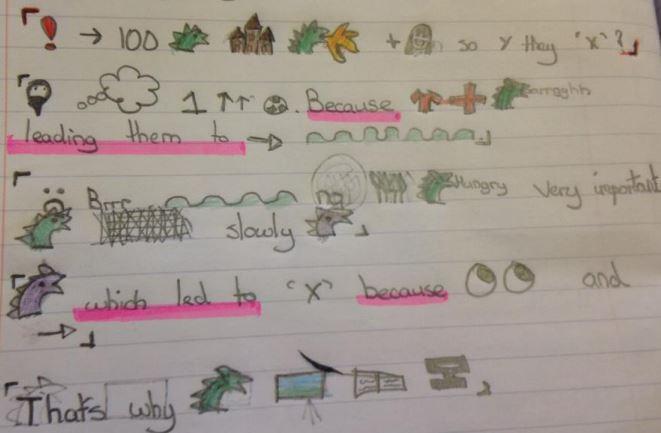 You could draw out a table to show comparisons to what has happened to Stanley and what he could tell his mum instead.

You could then use these tasks to help you plan out your letter and then begin writing.

Once finished, as a challenge, could you write a second letter to his lawyer explaining the awful conditions he has found himself in. This letter should be completely different and should allow you to focus on how your style of writing has to change depending on who is reading it.

I look forward to reading them :)

Unfortunately not the ones with chocolate chips.

Some cookies are necessary in order to make this website function correctly. These are set by default and whilst you can block or delete them by changing your browser settings, some functionality such as being able to log in to the website will not work if you do this. The necessary cookies set on this website are as follows:

Cookies that are not necessary to make the website work, but which enable additional functionality, can also be set. By default these cookies are disabled, but you can choose to enable them below: